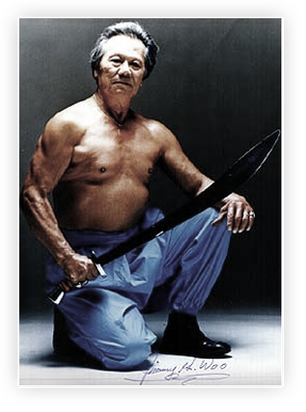 Chin Siu Dek, or Jimmy H. Woo, the man who brought San Soo to America.
"You can take my life, but not my confidence" - Jimmy Woo, aka Chin Siu Dek

Chin Siu Dek (aka Jimmy H. Woo), the man responsible for bringing Kung Fu San Soo to America, learned Kung Fu San Soo from his Great Uncle Chin Siu Hung in the early 1900's. Hung was an overlord for the entire province, which at that time (the late 1800's and until 1941) was about the size of Orange County, CA.  No one started a business, moved, or made any other major decisions without consulting Hung.  Chin Siu Dek soon became his top student and began teaching alongside his Great Uncle, as well as traveling around the province to make sure his Great Uncle's wishes were "enforced."

Records are admittedly spotty due to the turmoil around World War II and Cultural Revolution.  When the Japanese invaded during WWII, Chin Siu Dek, Hung's star pupil and enforcer, moved to California and changed his name to Jimmy H. Woo.  He worked as a grocer, moonlighting in security as one of the few unarmed bodyguards.  He began teaching, and eventually opened his own studio in El Monte, CA in 1959.