about Si-hing matt (aka matt) 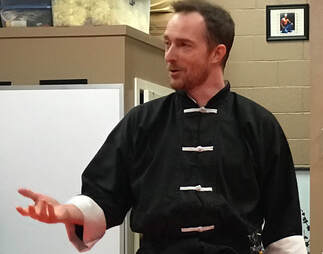 Si-Hing Matt
Matt Espiro Jaeger has has been teaching for close to 15 years.  As a former victim of violence and bullying, he believes martial arts is an excellent way for kids to learn self confidence and the skills they need to stand up for themselves in a bullying situation.
Matt began his martial arts training at the tender age of 10, where he learned Shorin Ryu Karate from Roger Salick at Salick's Karate in Delafield, WI.  After seven years there, Matt studied other styles (Aikido, Brazilian Jiu Jitsu, Boxing) in college and took a break from martial arts in his 20s until an intervention in an attempted kidnapping prompted him to begin his studies anew with Master Steve.
Si-Hing Matt Teaches
Five Familes Kung Fu San Soo
(818) 293-5335
FiveFamiliesKFSS@gmail.com
211 S Maclay Ave., San Fernando, CA 91340
*Martial arts is a combat sport.  Injury, disability, and even death can occur.  Be sure to consult with your doctor before beginning any kind of physical activity.
Powered by